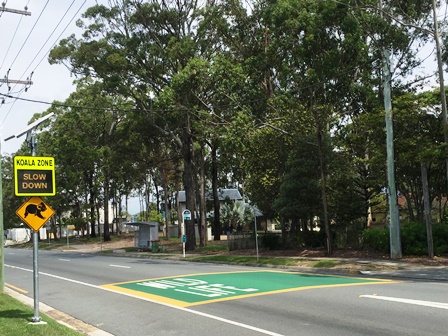 The Gold Coast supports an important population of koalas and is part of South East Queensland’s koala coast. The koala coast population has been steadily declining for a range of reasons, with vehicle-strikes being of particular significance.

Currently, wildlife warning signs are one of the only wildlife-vehicle collision mitigation measures that can be implemented quickly, for relatively low cost and at the landscape scale. Although static wildlife warning signs are the most common and widespread form of collision mitigation, evidence of their effectiveness is inconsistent. Recent innovations in traffic signage could potentially reduce the risk of wildlife-vehicle strikes and assessing their impact and optimising their designs and messages is important.

In 2018 the City, in partnership with the Griffith University Road Ecology Group and Redland City Council, undertook a 10-week pilot research project to evaluate how effective different types of dynamic road sign messages were at reducing vehicle speeds in known koala areas.

The signs used for the trial were Speed Awareness Device (SAD) signs, with standard fluorescent yellow panels and the wording ‘KOALA ZONE’ above a standard yellow warning sign displaying a black koala silhouette. The signs have a built in speed detection radar and display variable images depending on the speed detected. Each sign recorded the date, time, and two speeds: one when the vehicle was first detected and one when the vehicle passed the sign. Control data for each site was collected prior to the signs being installed.

All signs were programmed to alternate the relevant message with the speed of the vehicle, with the colour of the speed number matching the respective messages.

A special thanks goes to Division 4 Councillor Kristyn Boulton who purchased the two signs that were deployed along Pine Ridge Road, as well as the subsequent WILDLIFE road paintings. The signs on Discovery Drive were funded by the City’s Vulnerable Species Management Team. 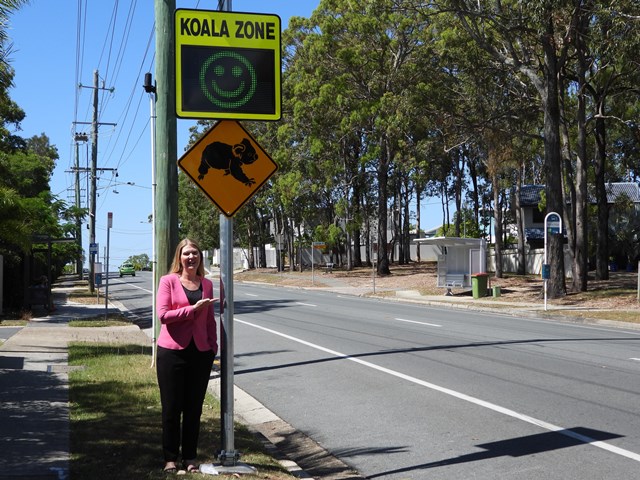